Some of the greatest leaders of our lifetime have agreed on one thing: that biology and technology have been on a collision course for quite some time and the populations’ acceptance, and in some cases addiction, to their smart phone and smart devices certainly indicates the two are at the crossroads. Steve Jobs said, “I think the biggest innovations of the 21st century will be at the intersection of biology and technology. A new era is beginning” (Issacson, 2011). In June 2007 the manifestation of a handheld device was introduced to the global population that would immediately curve markets, spawn innovation, create job growth, connect humans in a fashion that we never thought imaginable, and plant the seeds of reform to the manner in which large institutions like Government and Healthcare operate.

This event in particular has forced the relationship between the Healthcare community and its customer to change. The platform by which Doctors and their patients interact is in need of a new, clearly defined meta-framework and process. One that can be measured, duplicated, and built upon as new discoveries are unearthed. One that meets the patients unmet needs.

Not since Gutenberg’s printing press have we as a humans seen such a dramatic shift in the power to access, share, store information, educate ourselves (quantitatively and qualitatively), and communicate so efficiently. The printing press gave birth to new ideas, new methods of science and religion, and did it in a format that translated to the masses thus spawning the Age of Enlightenment and the Reformation. Its hard to find something that has been more disruptive than Martin Luther’s “95 theses” in 1517 or Galileo’s “Sidereus Nuncius” in 1610. In comparison, the smart phone has proved to be the catalyst to increase human awareness, drive markets, and all in the manner which we operate, regardless of language and aptitude barriers, through mobility. It was a very simple adoption to our population because we got something for it. People saw what the device could do for them and simply accepted it out of their own self-interest. Therein lies the mechanism that is forcing change at the intersection of biology and technology; self-interest causing a shift in the opportunities and the obligations that we (humans) sign up for. Oddly, enough both the printing press and the smart phone have also changed the manner in which we as a people look at massive institutions like government, the church, and……..Healthcare.

With this new-age shift in power, the once paternalistic institutions like Healthcare and the regulatory agencies that surround it are now find themselves faced with (just to name a few):

The dynamic between patient and provider to become more of a partnership, and even consumer, should reap a higher quality of care, higher rates of adherence, increased self-awareness, and alerts preventing critical care situations. On the medical/clinical side of the equation, this means higher enrollment and retention rates, novel therapeutic treatments that work, new discoveries via multiple data points, more efficient methods of testing drugs/devices and arriving at outcomes quicker, and new devices that engage its users with actual value-add information that may increase their well-being or potentially save their life.

“Explosive growth of smartphones and tablet PCs brought the number of devices connected to the Internet to 12.5 billion in 2010, while the world’s human population increased to 6.8 billion, making the number of connected devices per person more than 1 (1.84 to be exact) for the first time in history. (see Figure 1)” 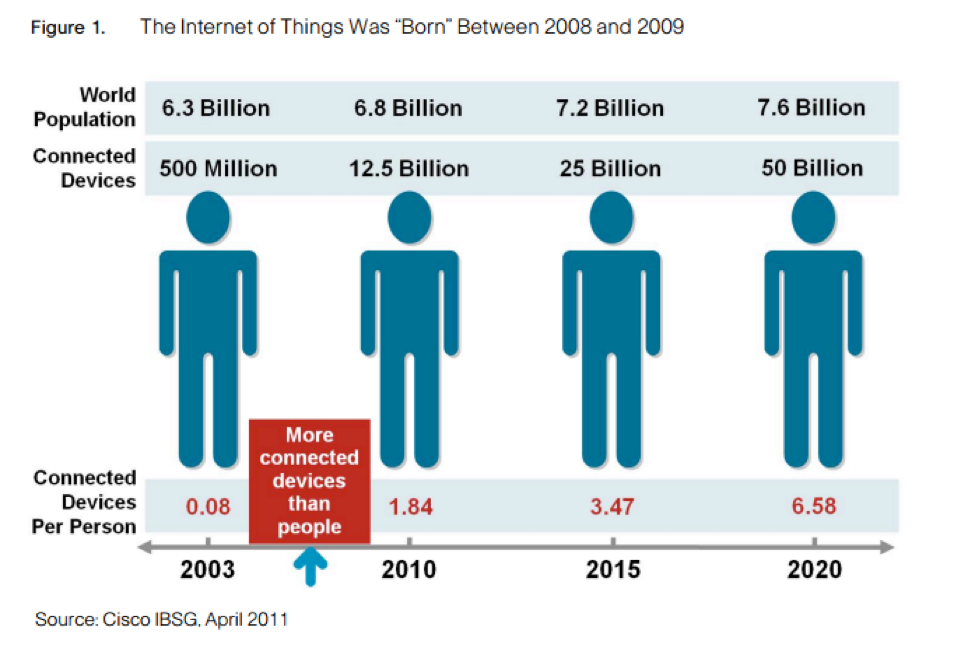 Based on those figures, we can look closer at the economic impact of “smart” medical device market. The global smart medical devices market is expected to reach USD 24.46 billion by 2025, according to a new report by Grand View Research, Inc. The increasing adoption of smartphones is observed as a major factor driving market growth. In addition, the technological advancement and the rising awareness and focus on fitness is driving the market (1).

Partnerships require give and take from both sides whereby value is incorporated into the exchange.  In the case of Healthcare, and clinical trials specifically, a partnership is simply; a hierarchy of interactional (interchangeable) patient touch points and/or social engagements that are designed to establish a richer, personal experience for the subject and, in exchange; the clinical administrator receives a full life cycle and trial adherence from the patient.

There are a number of advocates in this arena that focus solely on creating the foundational framework for a more collaborative relationship between providers and their patients. Organizations like “patients like me”, “patient focused medicines development”, and “the patient advocate foundation” are all striving for collaborative efforts from the different stakeholders across the globe to identify the gaps and the synergies so a measurable solution can be discovered, and then built upon. The complexities of all involved in this ecosystem is overwhelming:

Meta-Data pooling across this landscape obviously illustrates diversity among all stakeholders and in some cases, where they may reside within the patient-lifecycle.

Therefore, identifying patient-partnership initiatives and solutions will be segment specific with the intention of pinpointing hybrid commonalties that can be implemented regardless of the environment.

So, now to the heart of the subject what does a solution promoting partnership look like?

Here’s a brief example of a use-case from a patient from LifeLab’s solution.

I’ve been asked to participate in thyroid study that incorporates a wearable device, requires me to partake in cognitive games/tests, and asks me to offer a blood sample via dried blood spot kit which I can perform pretty much anywhere.

Outside of the patient outcome from the clinical side, the patient was educated, supported, and empowered to a level whereby they recognized the experience, the positive change within themselves, and would do it again. That is a good start.

What are the goals we should be striving for?

The immediate goal is to identify a simple approach, or mechanisms, to this partnership that works as a foundation and can be replicated so its application (or parts thereof) will operate holistically within multiple healthcare segments where this relationship exists. This is not a one size fits all solution. As each individual is different, so are their needs. That being said, the patient will be the co-designer and will very much shape the way this foundational framework drives.

The longer term goals here are many on the Healthcare-side as each segment within drives its own motives: the General Practitioners, Clinicians, the Surgeons, the radiologists, the Nurses, the Researchers, the regulatory agencies, the medical device companies, etc. On the Patient/Consumer side its personal health and well-being for them, their families, and their community. They also attain a clear and transparent understanding the vessel (their body)  that they currently occupy, how to optimize all of its features to the fullest, and how to treat it when it is broken.

One clear point to be made to achieve short or long term goals; BOTH sides need to continue to evolve.

If that relationship remains harmonious, we will arrive at this: The Human “GIS”. The Geographic Information System of the Human Being.

“The ability to digitize the medical essence of a human being is predicated on the integration of multiscale data, akin to a Google map, which consists of superimposed layers of data such as street, traffic, and satellite views. For a human being, these layers include demographics and the social graph, biosensors to capture the individual’s physiome, imaging to depict the anatomy (often along with physiologic data), and the biology from the various omics (genome-DNA sequence, transcriptome, proteome, metabolome, microbiome, and epigenome). In addition to all of these layers, there is one’s important environmental exposure data, known as the “exposome.” (3)

To capture, leverage, and convey this concept, which is obviously always in flux, should be the collective goal among all parties. The table is set for the collaboration to progress toward this goal.